OHM2Resolume is a MAX project to make Livid’s MIDI-controller OHM64 talk to Resolume’s VJ-application Avenue and vice verca. I was tired of not getting any LED-Feedback on my MIDI-Controller when performing in a usually dark surrounding called club. So I started with some basic XML-parsing and added on top of it to get more complex control over the software. I think Peter Kern from CreateDigitalMotion has given a nice résumé:


Trigger, mix, effects… there are certain things you need to do as a visualist, and the combination of buttons with faders and encoders on the Ohm64 controller from Livid was clearly designed by visualists. The monome-style grid does indeed lend itself well to triggering, but you also need parameter control for mixing different channels and controlling parameters like effects. That means that its split-layout design is quite ideal for visual performance.

Here, we see German YouTube user Tschoepler put those controls to good use, combining the Ohm with the Mac/Windows Resolume Avenue VJ software (seen here on Windows). In a way, it’s a wordless tutorial for how to use the combination. See part 1 and 2 after the jump, to see its evolution. […]

In this case, this is more than just a simple control layout. A Max patch actually parses the Avenue setup file, and provides interactive feedback on details like clip position on each deck. (See the full details below.) […] But the important message here, to me, is what you can do with smart controller mapping. And if that helps you express what you want in a visual performance, that’s the real bottom line.

Open 7z files with either 7-zip (Windows) or The Unarchiver (OS X).
Both applications are free for use (OpenSource).

How to get started 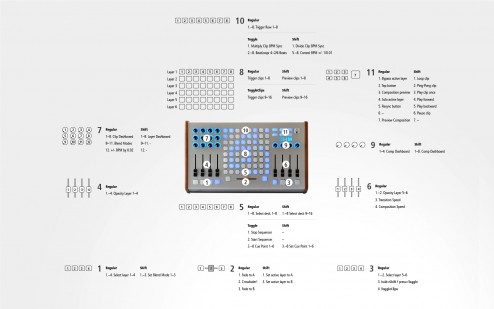